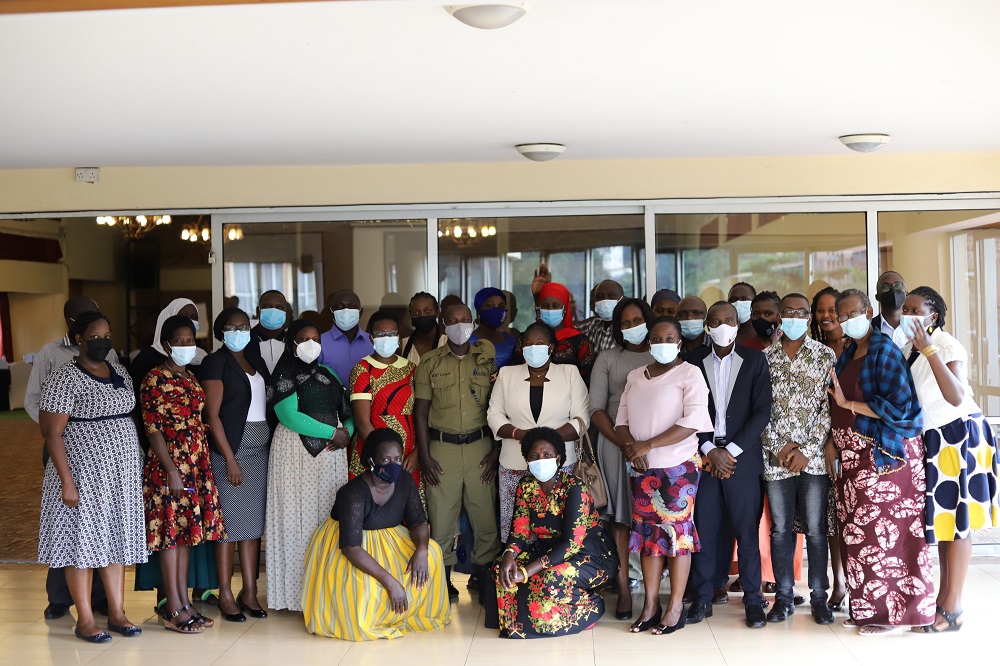 The Peace Centre in partnership with the Ministry of Internal Affairs’ Conflict Early Warning and Early Response system (CEWERU) has been holding routine quarterly feedback meetings with Members of the National Steering Committee to receive and respond to early warning reports from violence monitors, peace mediators and Members of the District Peace Committee and take action. Between 30th September to 1st October 2021, The Peace Centre held a 2-day feedback meeting with the National Steering Committee to review early warning reports compiled from Yumbe, Adjumani, Kotido, Arua, Kassanda, Kapelebyong, Lira, Soroti, Luwero and Kampala.

In her opening remarks, Juliet Were, The Peace Centre’s Deputy Executive Director reminded the National Steering Committee of its cardinal role and responsibility to coordinate peace initiatives, voice conflict issues and promote peace in Uganda. She noted that without substantive peace structures at all levels, the National Action Plan III will have a limited effect which will hinder the achievement of the desired objectives. She commended CEWERU and its Coordinator Florence Kirabira for the continued support and functionality of the National Steering Committee.

Florence Kirabira, National Coordinator CEWERU shared the status of early warning issues reported during the last steering committee meeting held in March 2021 with Diana Oroma speaking to the key emerging women, peace and security issues including illegal guns amongst citizens causing conflicts, violence against women, food insecurity, child labour among others. Below are some of the reactions and discussions following the presentations. “The Peace Centre influenced our approach, they are so passionate about enhancing women’s participation in peacebuilding, this made me reflect and mainstream gender in our peacebuilding initiatives and scaled up working with women in peacebuilding and its yielding greatly”– Betty Enangu, Uganda Human Rights Commission

“Elements of the influx of refugees has caused a lot of commotion in the refugee camps and the host communities, it should be noted that much as the government is working so hard to support these communities, there is an observation that the government has much more concentrated on building the welfare of Refugees, this has put host communities at crossroads with the refugees and this leads to conflicts between the two parties. Therefore, the National Steering Committee needs to categorise the factors that led to the outbreak of such conflicts in the host communities so as to prevent their escalation”- Hon Kaijuka Richard Arthur, Vice-Chairperson LC V, Adjumani District “We have a challenge where early warning incidents are reported however, early response to mitigate these incidents has been reluctant. Early warning signals from the field monitors and data collectors have often been shared with the key stakeholders however, response to mitigate these incidents that have led to violent conflicts in Karamoja and Masaka might have been signalled to key stakeholders before their escalation.”– Alvin Mutebi, a Conflict Analyst urged the committee to prioritize prompt early response before reported incidents escalate to violent conflict. “When are we disarming in the Karamoja region? Disarmament is taking a slow pace which is only instigating violent conflicts, enabling cattle raids and insecurity to thrive in the region. The government needs to urgently look into these issues, scale-up disarmament to build sustainable peace. There are no clear strategies through which massive disarmament across all the Karamoja districts, and neighbouring countries like Turkana of Kenya, Toposa of South Sudan is being implemented.”– Jessica Ataa, Peace Mediator, Kotido

The District Peace District representatives from Kotido, Kassanda, Arua, Kapelebyong, Yumbe and Adjumani share Women, Peace and Security issues and recommendations at the District level. In Adjumani, the District Peace Committee has responded to issues including the Pakele and Itirikwe border conflicts, addressed incidents of post-election violence through radio talk shows sharing messages on peace and development. In Kotido, the Community Development Officers convened dialogues with parents, boys and girls to discuss the increased teenage pregnancies in the community and child protection cases were referred for judicial or medical response and in Yumbe, the District Peace Committee increased the number of delivery beds to Barakala Health Centre III. They also relaxed some COVID prevention measures and allowed mothers to be transported to health centres for maternal health / pregnancy-related issues. In response to the water crisis, a borehole was drilled in Rumogi and pipe water extended affected areas within Yumbe Town Council.

In Kassanda, The Peace Centre enhanced the capacity of women in electoral processes. This has seen more women in leadership in political positions beyond affirmative action seats Data Analysts reported to the Women’s Situation Room and utilized community radio and to increase awareness of peaceful elections. However, there are some gaps i.e. change in leadership, with regular transfers and change in the political offices, and we need to engage the new district leaders and keep in contact with the women who dropped out of political leadership. In Kapelebyong, the deployment of observers resulted in peaceful elections, with the capacity building, the mediation skills applied beyond elections. They were able to mediate land conflicts and GBV cases in the community.  It was also noted that cattle rustling is high in the dry season as the Karamojong move to neighbouring districts in search of water and pastures. They recommend enhanced cross broader dialogues in a robust manner involving other stakeholders and figuring out solutions, sensitization on land issues, empowering more women, community legal clinics to address GBV issues, increasing the project scope. “As Conflict Analysts and Peace Mediators, we need to look out for the potential, outbreak and resurgence in conflict.”– Dr Helen Nambalirwa of Makerere Peace Center shares strategies to combating conflicts and key lessons for early warning in the different contexts.

Esther Wasagali, moderated and led participants in developing jointly agreed actions plans for the National Steering Committee. Where members defined a common agenda, and a specific joint advocacy plan to be implemented over the next months. The meeting was closed by Onoria Ambrose, the Resident District Commissioner, Kotido District who encouraged participants to continue working together to ensure peace prevails in the country.