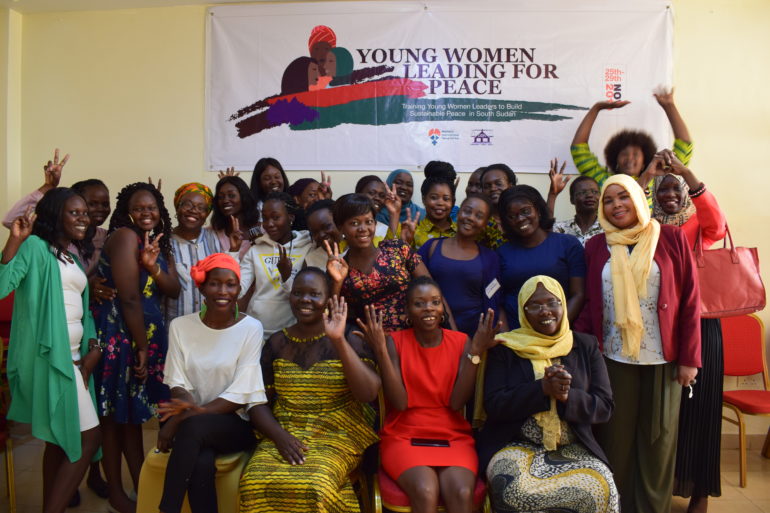 South Sudan assented to the UN Security Council Resolutions 1325 and 2250 highlighting the important role of young women in promoting peace and security. The 2015-2020 National Action Plan on UNSCR 1325 and Related Resolutions also represents this commitment to i) increase women’s participation in the prevention and resolution of conflicts, the maintenance of peace and security, and guaranteeing their participation in post-conflict peacebuilding, ii) enable peace and security stakeholders in South Sudan to galvanise their efforts and ensure improved implementation of gender-sensitive peace and security-focused initiatives at national and state levels and iii) ensuring the inclusion of women and girls’ needs in the national budgetary priorities of the transitional assistance plans developed by the Government and all programmes funded by development partners, including in the negotiations of the New Compact Deal. The government of South Sudan, through the national steering committee as well as inter-ministerial committee charged with monitoring implementation progress, has invited diverse stakeholders to contribute to the implementation of the plan or to strengthening the local capacities for the implementation.

Despite the existence of these commitments, frameworks and mechanisms, there are insufficient attempts to promote young women’s participation in peace processes, to amplify their voices or to influence in favour of their specific priorities. Since the outbreak of armed conflict in December 2013, the resurgence in July 2016 and with on-going efforts to resolve conflicts and to reconstruct, young women’s critical role in formal peacebuilding and conflict resolution has been under-explored despite their informal contributions.  The Women’s International Peace Centre is partnering with the Centre of Inclusive Governance, Peace and Justice (CIGPJ) to strengthen young women’s capacity to participate in and influence peace processes and their outcomes from a gender perspective in South Sudan. In the framework of this partnership, the WIPC brought together 20 young women aged 18 to 35 from political parties and civil society organisations for a 5-day training. The focus of the training was to equip young women in South Sudan for information gathering, data verification and gendered analysis of conflict trends, dynamics and their significance for on-going peace processes. The training also built their understanding of relevant national, regional and international policy frameworks, of on-going national peace processes, national and regional mechanisms as well as key women, peace and security thematic areas. This workshop aimed at building capacity for advocacy and collective action while enabling the creation of new spaces for them to engage key decision-makers at the national level. Additionally, it provided a space for intergenerational dialogue with older women peacebuilders and leaders for cross-learning and potential mentorship.