Kashmir Women; The Burden of Conflict, Half Widowhood and its Psychological Effects.

Homepage•Blog•Research Report•Kashmir Women; The Burden of Conflict, Half Widowhood and its Psychological Effects. 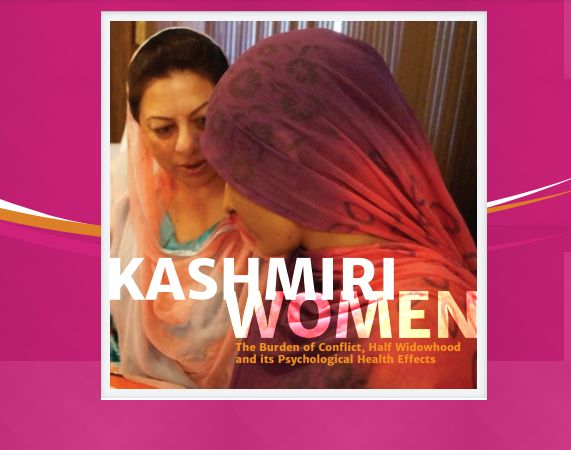 Isis-WICCE in partnership with Jamme/Kashmir Association carried out a study on the ‘impact of armed conflict on the Health of half widows in Kashmir- India’. The study explored the mental, social and physical impact of violence on the health of the half widows, mothers and sisters whose husbands and male relatives had gone missing due to the conflict. Forty-five women were randomly selected from the three districts of Srinagar, Baramulla and Kupwara of Kashmir valley, comprising of half widows (whose husbands are missing in custody), mothers of disappeared persons (whose sons are missing in custody), sisters (whose brothers are missing in custody) and daughters of the missing persons. Key findings show that half widows have become targets of sexual violence from those viewing them as defenseless.

KASHMIRI WOMEN THE BURDEN OF CONFLICT,HALF WIDOWHOOD AND ITS PSYCHOLOGICAL HEALTH EFFECTSDownload
FacebookTweetLinkedInPrint