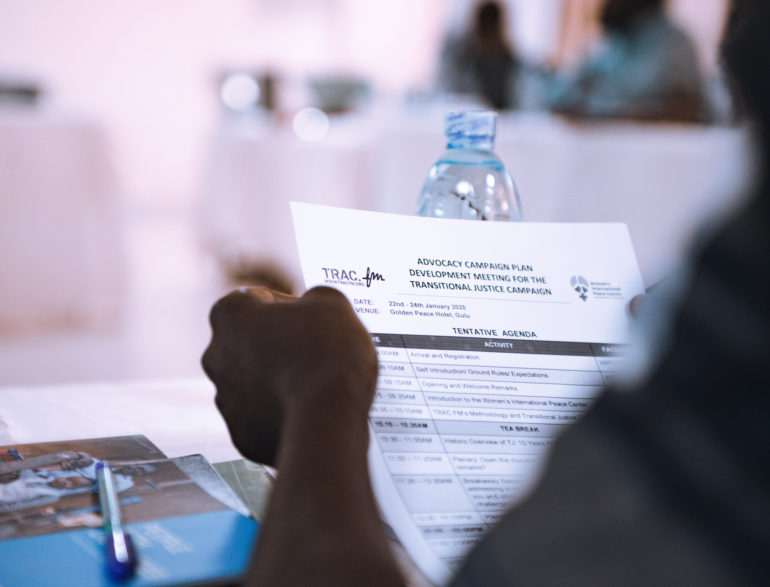 During the meeting, we identified and agreed on the focus areas for the campaign including goals and objectives, identified existing and new advocacy issues and opportunities related to transitional justice in northern Uganda mapped out stakeholders that are relevant to the conversation on transitional justice and strategize on a memorization act for northern Uganda.

Some of the issues raised after the presentation included; Popularisation of the policy among its beneficiaries and the citizens; there should be a strategy developed by all relevant stakeholders to popularise and publicize the policy. The policy does not address the issue of stateless children born during the wars and the issue of the atrocities has been narrowed down to northern issues yet victims think it should be handled as a national issue. The participants formed groups to discuss what issues (challenges/ problems) they are addressing in regard to Transitional Justice, solutions/ interventions that they and other stakeholders/ partners are using to address those challenges?

What opportunities does radio present in the campaign?

During this session, participants discussed the role of the media in the campaign highlighting that the media should not cause friction within the public to enable the campaign to achieve its objectives but rather use radio as a mediator between the government and the victims of the atrocities. There have been different unfruitful interventions on Transitional Justice in the target communities of the campaign and victims are tired of dialogues. How is this campaign going to be different?  What strategies have been laid to achieve results? Participants emphasized that the poll questions shouldn’t be pointing figures but facilitating more open dialogue and the campaign should educate victims that reparation does not necessarily mean compensation.