Women’s Experiences During Armed Conflict in Southern Sudan, 1983-2005; The Case of Juba County 2008 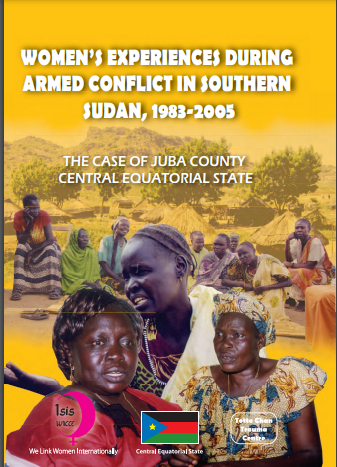 The study documented the experiences of South Sudanese women in the two decades-long armed conflict from 1983-2005. The study covered Juba town in Central Equatorial state. The study shows the devastating impact of conflict on the political, socio-economic and cultural dynamics of South Sudanese women. They were subjected to the most humiliating, brutal and traumatizing experiences. Apart from gang rape, often in the presence of their children, and spouses, women’s vaginas were mutilated with bayonets while young girls would have their external genitalia especially the clitoris cutout. Experiences of such gruesome torture and humiliation often resulted into mental breakdown and physical health problems.

The study reveals that the prolonged civil armed conflict greatly impacted on the population with acute poverty, poor health, persistent insecurity of persons and property, displacement and congestion in the internally displaced people’s camps.