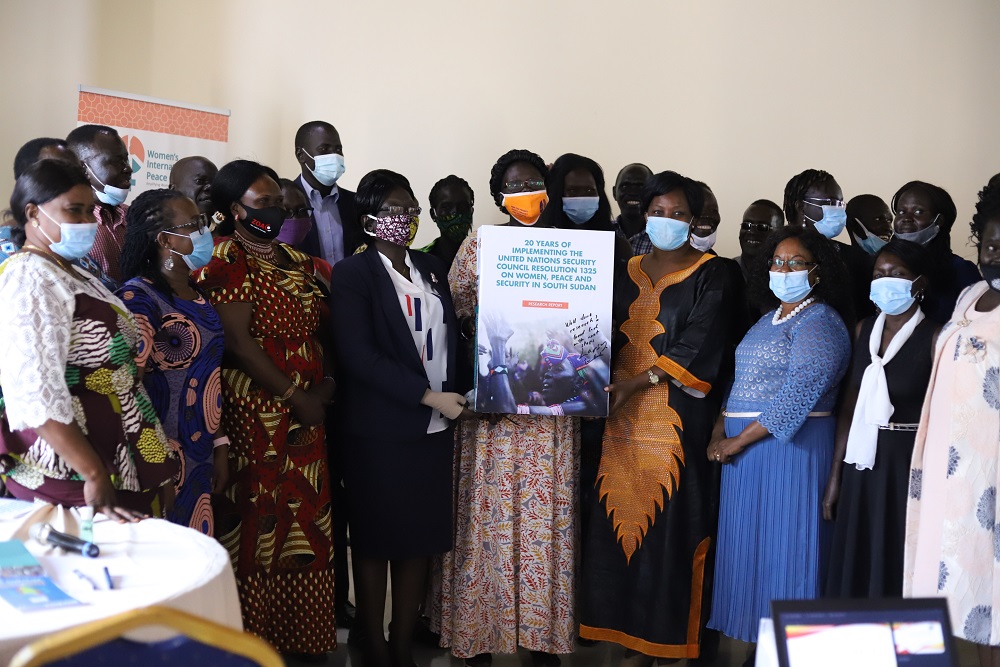 The month of June kicked off with the official launch of our research report on 20 years of implementing the United Nations Security Council Resolution 1325 in South Sudan with support from the Forum for Women and Development (FOKUS) and in partnership with the Ministry of Gender, Child and Social Welfare (MoGCSW) in Juba. The launch was attended by 43 participants comprising of representatives from ministries including the Ministry of General Education and Instruction, Ministry of Defence and Veterans Affairs, Ministry of Humanitarian Affairs and Disaster Management, Ministry of mining, MoGCSW, Ministry of East African Community Affairs, Ministry of Finance and Economic Planning, Embassy of Sweden in Juba, development partners and CSOs.

The year 2020 marked the 20th anniversary of the United Nations Security Council Resolution (UNSCR) 1325 and the 25th anniversary of the Beijing Declaration and Platform for Action (BPFA+25). Both instruments have been vital in driving progress and pushing for the attainment of the women, peace and security (WPS) agenda. The WPS agenda also offers an opportunity to reflect on the concerns of women in armed conflict as one of the critical areas of achieving gender equality. This made 2020 an important year to reflect on progress, setbacks, challenges and opportunities to advance the WPS agenda in South Sudan and to leverage the anniversary to accelerate the implementation of key commitments and WPS frameworks.

The research launch shared key research findings with stakeholders to spark a conversation on UNSCR 1325 and the Women Peace and Security (WPS) agenda while highlighting key recommendations that were presented by Dr Angelina Mattijo-Bazugba and Hon. Esther Ikere.

The report has provided a strong foundation for the development of the Revised National Action Plan for South Sudan and therefore urged all partners on Women, Peace and Security to pledge support towards the development of the Second National Action Plan, Hon. Aya Benjamin Warille noted in her keynote speech which officially launched the research.

Findings from the research offer an in-depth understanding of the current situation, the successes and challenges and more importantly, the policies and programmes established to promote women, peace and security. Some of the notable strides in the implementation of the UNSCR 1325 in South Sudan include; the participation of women in peace negotiation processes as mediators and delegates out of which seven of them were signatories to the Revitalized Agreement on the Resolutions of Conflict in the Republic of South Sudan (R-ARCSS) signed in September 2018.  The 25% quota for women enshrined in the legal framework – Transitional Constitution of South Sudan (TCSS 2011) and other key policies, increased public awareness of the need to protect women’s rights, prevent conflict and gender-based violence. With the signing of the R-ARCSS, which provides for a 35% quota for women’s representation in decision-making structures, the TCSS has been amended to include 35% quotas.

Despite the progress, gaps exist between policy and practice, which continues to undermine the inclusion of women and the implementation of the 35 per cent gender quotas provided in the R-ARCSS. This is mainly due to persistent gender norms in institutions of political recruitment most of which prefer men to women leaders, self-centredness, harmful cultural practices, violence against women and limited allocation of resources to women, peace and security programmes.

The research findings showed that there had been great strides made in the implementation of the UNSCR 1325 in South Sudan. The adoption of UNSCR 1325 enabled South Sudan and women advocates to mainstream WPS issues in the reconstruction of post-conflict South Sudan. The domesticated South Sudan National Action Plan (SSNAP) was a useful framework underlining the roles and responsibilities of each line ministry in implementing and monitoring the WPS agenda.

The launch of the research on 20 years of Implementing UNSCR 1325 in South Sudan was timely and provided contextually rich content or information that would be useful in the development of the 2nd SSNAP. The report also provides recommendations if implemented will elevate the WPS agenda in South Sudan.