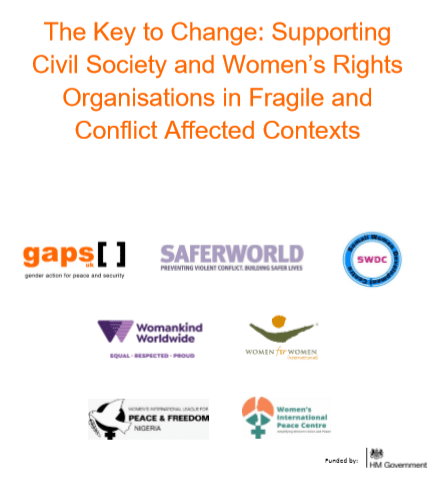 The Key to Change: Supporting Civil Society and Women’s Rights Organisations in Fragile and Conflict-Affected Contexts

This research, undertaken by a consortium of organisations including Gender Action Peace and Security (GAPS), Somali Women Development Centre (SWDC), Saferworld, Women for Women International, Women’s International Peace Centre (The Peace Centre), Women’s International League for Peace and Freedom (WILPF) Nigeria and Womankind Worldwide. This research report, funded by the UK’s Conflict, Security and Stability Fund (CSSF), sets out recommendations for modalities to fund, support and strengthen WROs and CSOs, as well as enable the UK, CSSF Africa and the international community – including donors, multilaterals and INGOs – to better understand the challenges and opportunities for WROs and CSOs working on peace and security issues in Somalia, South Sudan, Nigeria and globally. This report outlines the findings and recommendations of this research and is supplemented by country-specific reports for Nigeria, South Sudan and Somalia.

From 25th to 26th February 2020, The Peace Centre with support from FOKUS and UN Women convened a dialogue under the theme “The
South Sudan Peace Process; The Role and Prospects
for Refugee Women” to provide a platform for refugee women to understand and receive updates on the peacebuilding processes, link the refugee women with other women involved in advocacy towards engendering the peace processes in South Sudan and ignite women’s ability to participate in the formal and informal peacebuilding processes right from the refugee settlement for sustainable peace in South Sudan.

This report shares details of the proceedings of the conference. 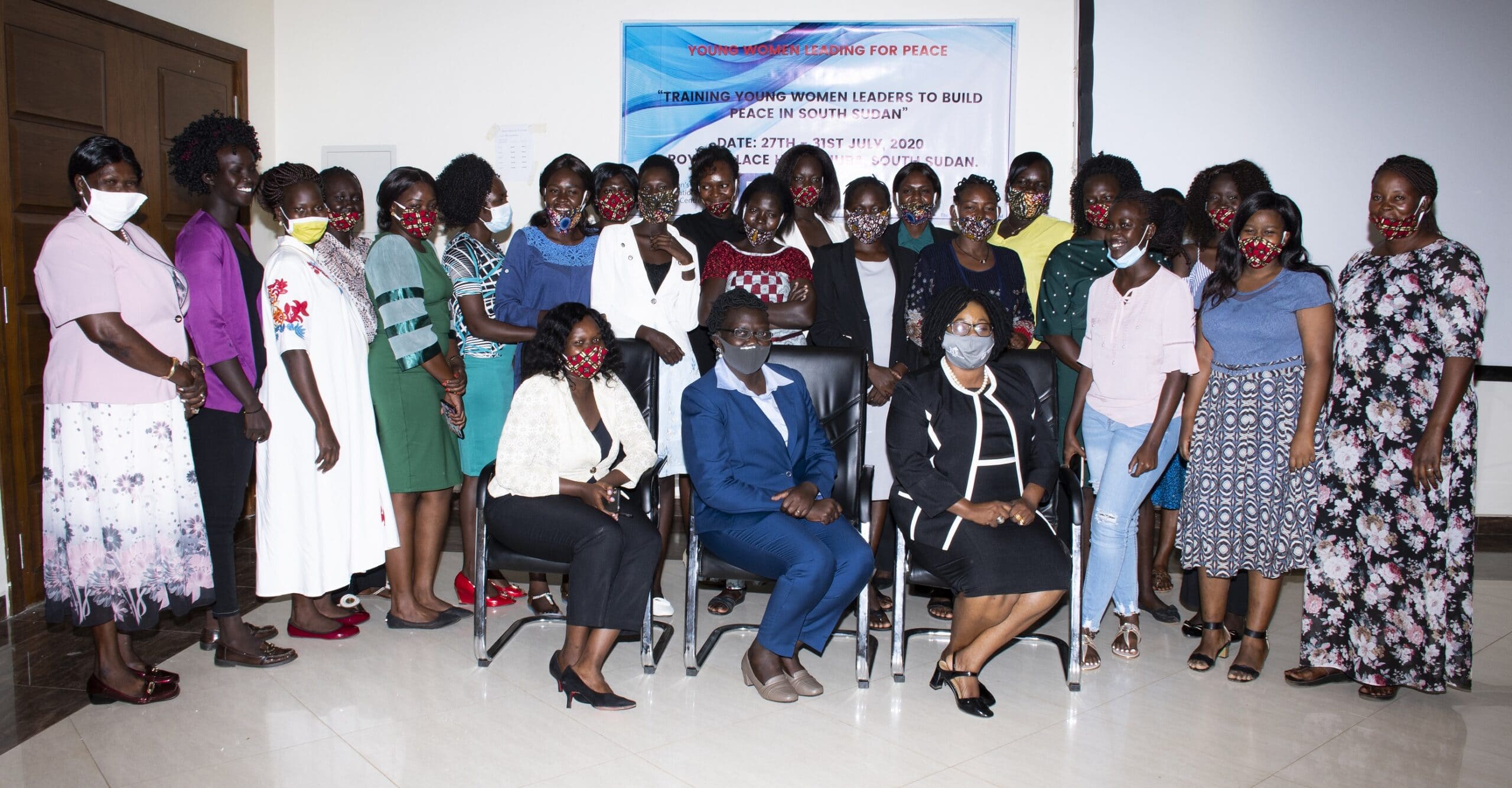 Session One focused on the key Concepts on Gender, Transformational Leadership, Peace Building and Conflict Management. The objective of the session was to familiarise participants and develop a common understanding of the meaning of terms that would be used throughout the training. Participants were asked to recall their early childhood days and share what age they discovered that they were girls and not boys. A number of issues were raised that helped to explain the meaning of various terms including sex, gender and gender roles:
• Many discovered their gender when they were four to six years old, through what their parents said or forbid them to do. For example, being forbidden to bathe together with boys or use a common toilet
in school or squatting while urinating, instead of standing.
• Others discovered gender roles when they were assigned to assist their mothers in the kitchen, and other household chores, while their brothers were playing with other boys or doing other roles assigned to men in their communities

Through this discussion, a distinction was made between sex and gender and how socialisation can affect women’s presence and participation in the public arena. The facilitator further explained how culture and unequal
opportunities availed to men and women could result in discrimination, oppression or exclusion of women in nation building.

Day two kicked off with a session on conflict mapping and analysis, as well as non-violent conflict resolution strategies which focused on dialogue and
mediation. Participants defined what conflicts look like in their communities conflict y issues such as land disputes, cattle raiding, domestic violence etc. Using a Conflict triangle, the session facilitator Dr. Angelina Bazugba demonstrated how conflict occurs and noted the contradictions, attitudes involved and the behaviour of different individuals or parties to the conflict. Key factors contributing to the conflict in South Sudan were discussed. Consequently, various conflict resolution strategies were explored. Emphasis was placed on non-violent strategies including dialogue, negotiation, mediation and arbitration.

Day 3 covered roleplays on conflict resolution. The first role-play was about land grabbing. The grabber lived on the land for a long time before the real owner of the land showed up. Both of them had legal titles, but the grabber threatened to kill the real owner. The case was reported to the community leader who in response called a meeting to resolve the conflict. The meeting involved the Minister for Housing, City Council, Police, community members and the media. The objective of the meeting was to bring two conflicting people to dialogue and find a peaceful solution. The meeting resolved to return the land to the rightful owner with compensation while the grabber was given some money that is equivalent to what was invested on the land. The second role play was on mediation. Key issues emerging from the roleplays included Gender based violence, inheritance of women, girl child denied rights to live with her mother, Power struggles in cultural context, Access and ownership of resources among others.

During the session that covered the Women Peace and Security Agenda, participants were familiarised with key institutional frameworks that support women’s role in the women, peace and security agenda and to discuss national, regional and international frameworks advocating
for gender equality. Frameworks highlighted included; The Convention on Elimination of all forms of Discrimination Against Women, Beijing Platform for Action, UNSCR 1325: The United Nations Security Council
Resolution based on the four pillars of prevention, protection, participation, relief and recovery. Participants were encouraged to understand these
documents for effective advocacy and lobbying on women’s rights.

The session was on wellness, self-care and personal development was facilitated by Hope Chigudu, a mentor and coauthor of the Healing through Rituals guide for sustaining wellness and activism and shared selfcare tips with the Young Women. Hope emphasised that women struggle everywhere with issues because women are not well grounded in the right information about themselves. Women must talk about their issues openly and get the help they need.

The last session covered action plan development and as young transformational leaders they were asked to identify at least two major advocacy activities which they could do to apply the knowledge and skills acquired from the training.