The Women. Peace and Security (WPS) and Youth, Peace and Security (YPS) agendas have evolved in Africa with palpable results including a substantial increase in the quantum and quality of women and youth participation in peace and security issues. While Member States have the primary responsibility to ensure that the global and regional commitments on both the WPS and YPS agendas are implemented and integrated into domestic policies, laws, planning and budget processes, it is also a multi stakeholders’ duty, as duty bearers for ensuring collectively sustainable outcomes.

END_OF_DOCUMENT_TOKEN_TO_BE_REPLACED 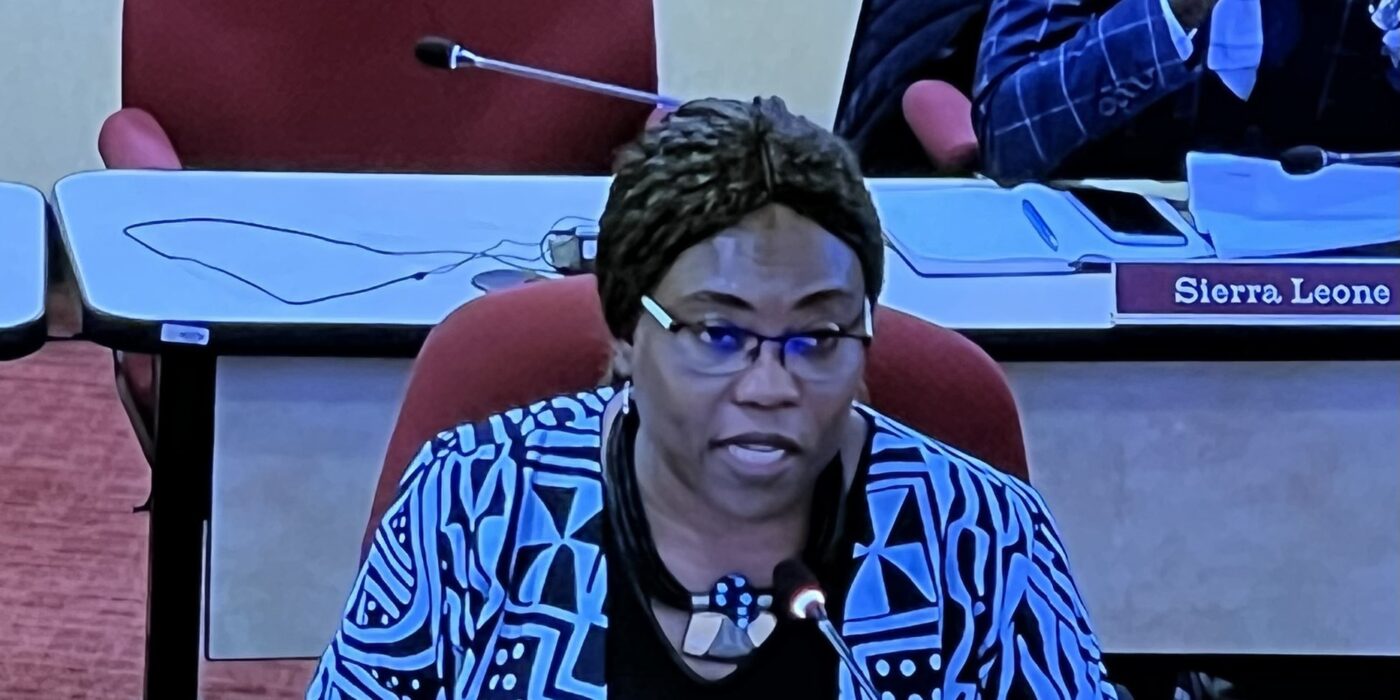 October 31st 2022, marks exactly 22 years since the adoption of United Nations (UN) Security Council Resolution 1325 on women, peace and security (WPS). Every year during the month of October the UN Security Council convenes an open debate to receive the report of the UN Secretary-General on WPS and listen to member states, UN entities, and different actors on the status of implementing the women, peace and security agenda. This year was no different as the meeting took place on October 21st 2022.

In this article, I share some of the gains of the WPS movement and areas that need more work as reflected in the 2022 UN Security Council open debate.

END_OF_DOCUMENT_TOKEN_TO_BE_REPLACED 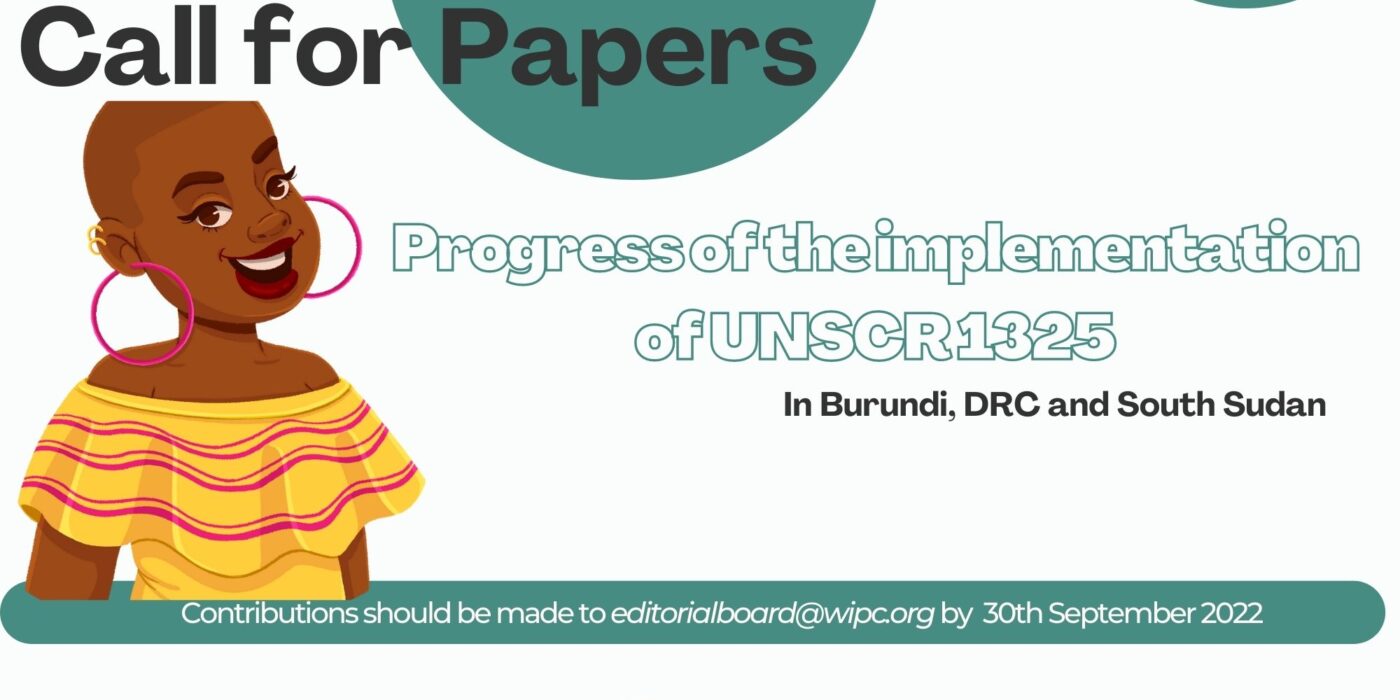 Women’s International Peace Centre invites submission of papers/articles on the progress of the implementation of United Nations Security Council Resolution (UNSCR) 1325 in Burundi, the Democratic Republic of Congo (DRC) and South Sudan. The submissions will track progress of the Women, Peace and Security (WPS) agenda and offer key recommendations for policy makers, in the build up to the 25th anniversary of UNSCR 1325 in 2025. The papers/articles will be published as part of the Peace Centre’s campaign on WPS, under the auspices of the Just Future Alliance.

The year 2022 marks the 22nd anniversary of UN Security Council Resolution 1325 on Women, Peace and Security, which acknowledges the important role of women in the prevention and resolution of conflicts and in peace building. It also underscores the importance of women’s equal participation and full involvement in all efforts for the maintenance and promotion of peace and security.

To date, the instrument has had a fundamental impact on the peace and security policies and practices of local communities, national states, as well as regional and international mechanisms. It represents a significant step forward in understanding security issues outside the traditional context of state security and, accordingly, states as major actors in both peace and conflict issues.

However, there are concerns about the degree to which UNSCR 1325 is actually being translated into programmes and measures on the ground, for example, through the operationalisation of National Action Plans (NAPs) and what tangible impacts this has had on women’s peace and security. There are also implications of the resolution’s focus on armed conflict, as opposed to other forms of structural violence, for peace and security.

Progress of the WPS Agenda in Burundi, DRC and South Sudan.

We, therefore, seek to critically examine UNSCR 1325 on Women, Peace and Security, its implementation and its relevance to women’s activism, the protection of women in conflict, conflict resolution and peace building and/or the governance of international peace and security in Burundi, DRC and South Sudan. The publication will review the implementation of resolution 1325 and subsequent resolutions, as well as examine ways to further enhance their impact in the three countries.

We welcome articles presenting new data on single or multiple cases in these countries and (or) theoretical explorations of 1325, from a diversity of disciplinary backgrounds, not only politics. We seek contributions to address the current challenges and country-level perspectives on the UNSCR Resolution 1325 on the following themes:

Prospective authors should submit their articles in English or French to editorialboard@wipc.org by 30th September 2022, clearly stating Call for WPS Papers in their subject lines. Contributions should be below 2500 words. Content can be presented as analysis, critiques, good practice, lessons learnt and case studies. Reflection pieces by activists/practitioners and pedagogical discussions are also welcome. Please supply a biographical note, an abstract and contact information with your submission.

Contributors will be given a modest honorarium and have an opportunity to present their work at the launch of the publication. 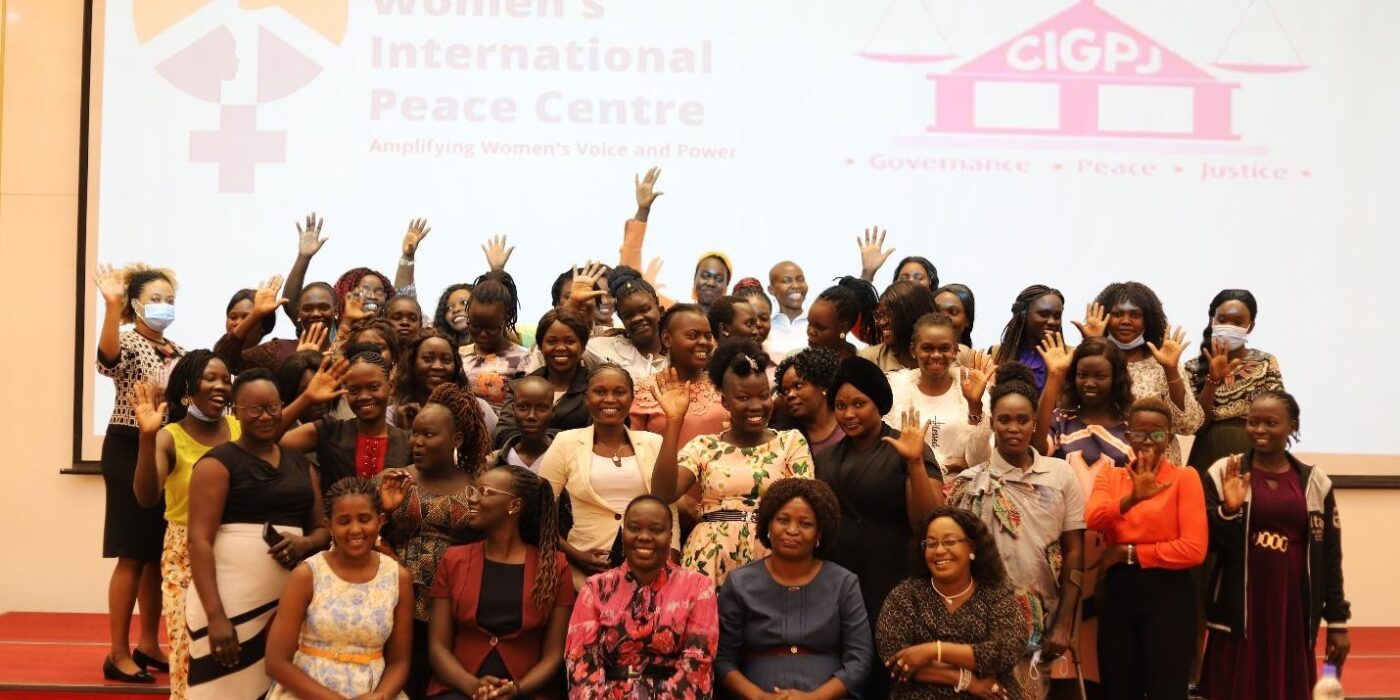 Currently, the Women’s International Peace Centre is implementing a project  “Building Sustainable Peace: Women, Peace, and Security (2019-2022)” in South Sudan. The project seeks to strengthen the capacity of women in South Sudan to mitigate conflict and sustain peace by enhancing their peace-building skills with a focus on mediation, conflict early warning, monitoring, analysis, and reporting from an engendered perspective.

From 20th to 25th June 2022, The Peace Centre conducted a training for 41 young women leaders from Wau, Yei, and Juba in South Sudan under the theme: “Young Women as Champions of Peace Building”, including youth leaders in the informal sector, young women leaders with disabilities, Civil Society youth leaders, political parties, academia, and female journalists.

During the training, participants were guided to share on the status of WPS in their communities. Key issues raised included increased gang violence, rape that is perpetuated by soldiers, weak laws on Gender Based Violence and the economic situation causing frustration in people among others.

It was noted that South Sudan is subject to International, continental and domestic frameworks such as; the African Charter on Human and People’s Rights on Rights of women in Africa (MAPUTO Protocol), AU Solemn Declaration on Gender Equality in Africa, Intergovernmental Authority of Development to mention but a few whose commitments she needed to respect. This however has not been the case as evidenced by the level of insecurity in the country.

The training also highlighted climate change and its impacts such as food insecurity and famine, displacements, excercabation of poverty as major causes of instability in the country thus solutions had to be found to combat the escalating problem.

From the training, the young women developed action plans focusing on addressing issues of early child pregnancies/marriages; Child labor and street children, and inaccessibility of Sexual Reproductive Health Rights for women living with disabilities which were to be implemented in their various communities based on the knowledge acquired. 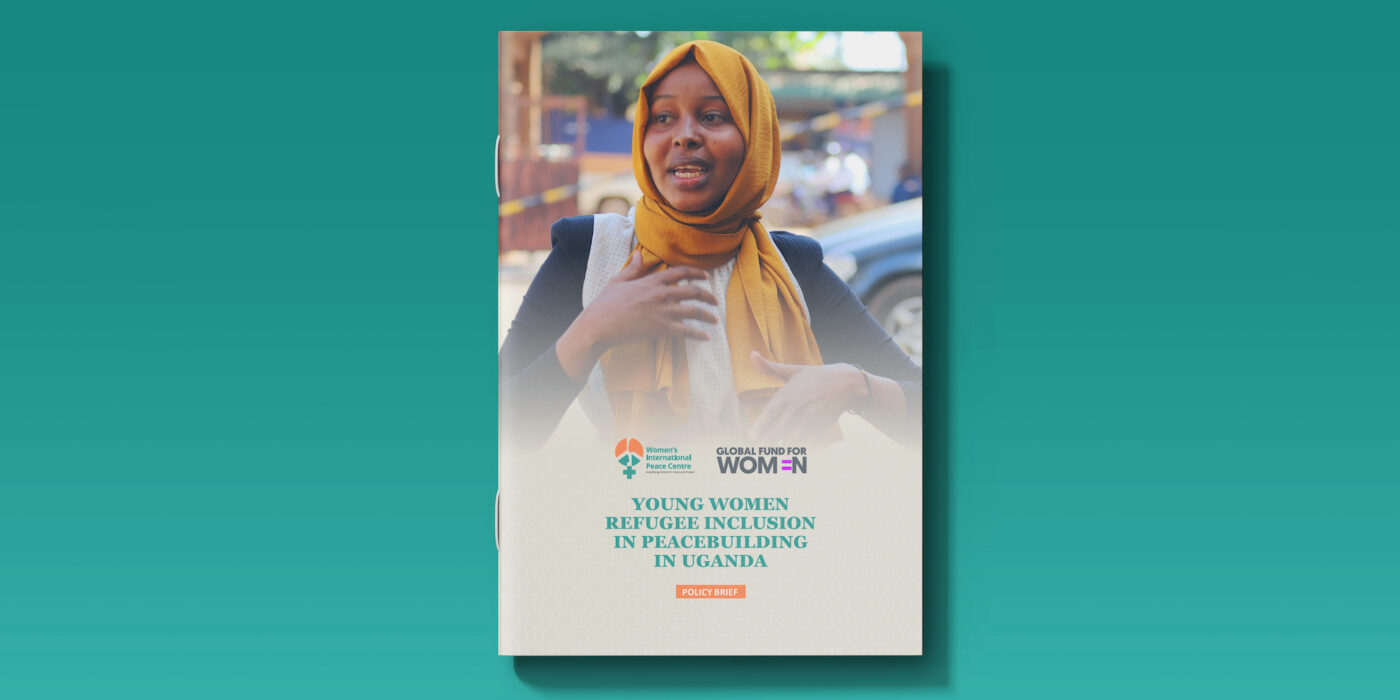 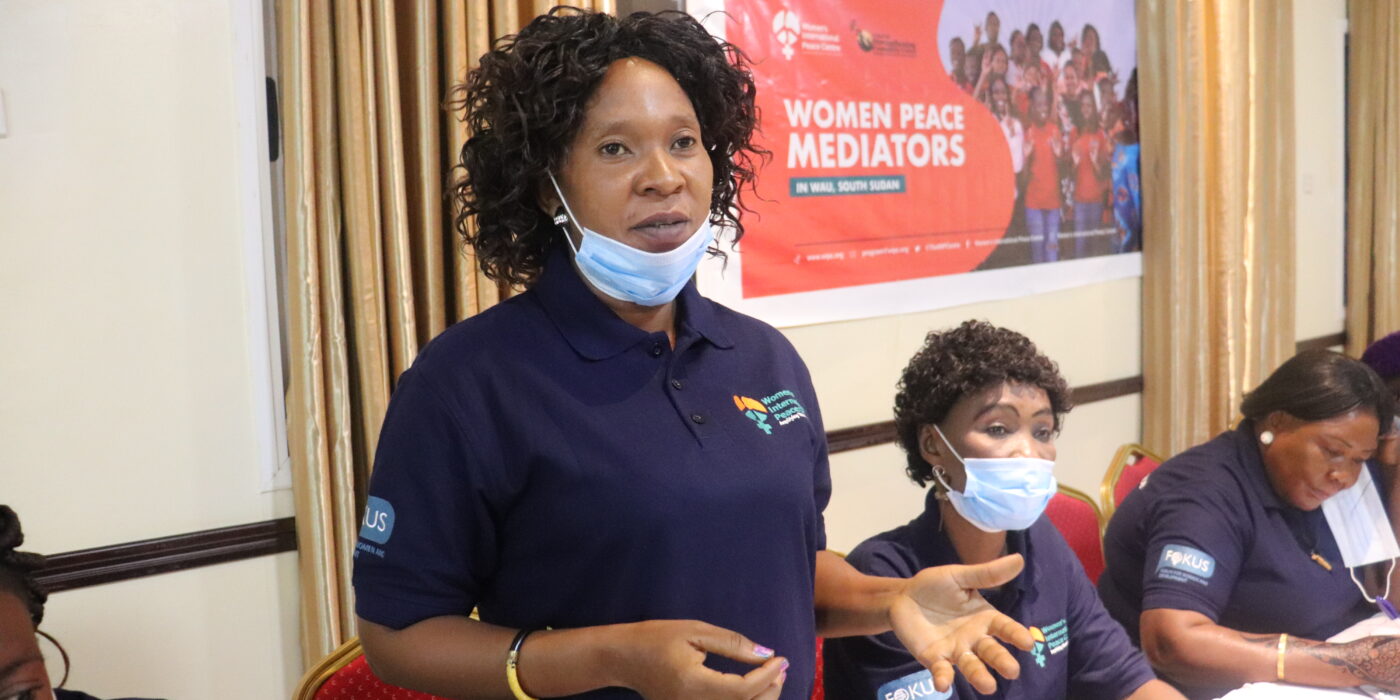 Through implementing the project “Strengthening Capacities for Women’s effective Participation in Conflict Prevention and Peacebuilding in South Sudan (2022)”, the Women’s International Peace Centre project seeks to strengthen the capacity of women in South Sudan to mitigate conflict and sustain peace through enhancing their peace building skills.